The Wrestler (レスラー, Resurā?) is a character in Ringside in Rhythm Heaven Fever and Rhythm Heaven Megamix. He, controlled by the player, is interviewed by the Reporter during a post-match interview.

The Wrestler is a tall, muscular man with tan skin. His regular outfit from Ringside consists of a striped red and gray mask, red pants, two red sweatbands, and gray boots.

The Wrestler's appearance slightly changes between the various Remixes from the Rhythm Heaven series. In Rhythm Heaven Fever's Remix 4, he appears as a ninja, and his outfit consists of a blue ninja mask, blue pants, two blue sweatbands and a katana on his back. In Remix 9 from Fever, he appears with the same clothes from Ringside, but with a stronger color palette, consisting of red, black, and white. In Rhythm Heaven Megamix's Songbird Remix, his pants and sweatbands are changed into yellow, and his mask is changed to yellow mask that resembles a bird.

During Wario...Where? 2: The Sequel, the Wrestler wears an outfit based on Wario-Man. 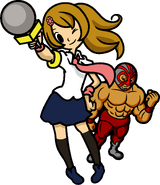 Spirit in Super Smash Bros. Ultimate
Add a photo to this gallery

Retrieved from "https://rhythmheaven.fandom.com/wiki/Wrestler?oldid=50549"
Community content is available under CC-BY-SA unless otherwise noted.