The Wandering Samurai ( , Koden Rikkoku?), also known as Samurai Steve in Beat the Beat: Rhythm Paradise, is a recurring character in the franchise, and appears in all four games in the series, much like Karate Joe, Hair Vegetables, and the Widgets. He is well known for his quick slice technique.[1]

The Wandering Samurai is devoted to the samurai code of Bushido and has a generally poor sense of direction[2]. His tale has been passed down through the ages. With no clear record left, no one is sure what his real name actually was.

Back then, Yokai would often invaded the village. They say they didn't actually attack people, but when people stumble upon them at night they get a big fright, so they were reasonably scared. Out of concern for those people, The Wandering Samurai went to slice all of those pesky monsters.[1]

In a side story, the samurai stays at a village to slice watermelons, fish and yokai to feed the local children.

The samurai wanders further, and as the sun dips below the horizon, the Wandering Samurai rests his weary body under a tree on the grounds of an old temple. He proceeds to sing the Picky Eaters' Song as he sleeps, and wakes up to two children, one holding a pinwheel, and the other hodling a rice ball. Their mother asked them to offer the rice ball to the samurai, who graciously accepts it, and finds the taste similar to how his own mother used to make them. Later, he stumbles upon the kids in distress, as their pinwheel was stolen by Demons. In the name of justice, the samurai follows the demons to a cliff, where he proceeds to slice them all until getting the pinwheel back. The samurai wanders further into a city, where he helps a businessman recover a bunny toy which he bought for his daughter, that was stolen by the maurading spirits. Sometime after that, the samurai travels the lands of old to complete his training[3], and at that moment, the demons kidnap a lady walking through the streets. He proceeds to slice every demon in his path to rescue her. The villagers are left confused by the black debris on the ground, as the samurai did not stay for the recognition[4]. At some point, the demons strike again and kidnap four ladies at once, with the samurai once again slicing many demons along the way to save them. This time he even gets a ride from Mister Eagle and uses a lightning bolt technique. The village scientists eventually figure out the debris comes from the monsters, and are mistified as the blue pieces are cool to the touch[5], but they are apparently more difficult to clean up[6].

In all of the Remixes the samurai has appeared in, he is seen protecting the village he wandered into for a little while longer before continuing on his journey. In Remix 4 from Rhythm Heaven Fever specifically, he is seen protecting a castle from the Demons, while a Wrestler interview and sorting job seem to be occuring inside. The Wandering Samurai also makes an appearance in Game & Wario, where he takes on a part-time job at a fish factory. It is unclear where these events take place in relation to the general story. 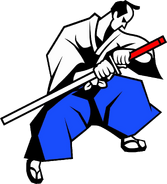 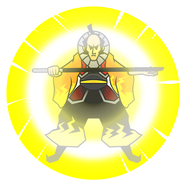 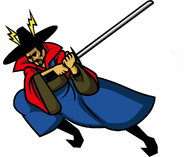 Artwork from Rhythm World The Best Plus (Super Samurai Slice)

Artwork from Rhythm World The Best Plus (Samurai Slice)

The Wandering Samurai in Game & Wario

Retrieved from "https://rhythmheaven.fandom.com/wiki/The_Wandering_Samurai?oldid=51634"
Community content is available under CC-BY-SA unless otherwise noted.