The spirits are all-white in color. They have large teeth and exceptionally long tongues. Besides their round shape and short white tails, these are their only defining features.

The Sneaky Spirits are well-known for causing mischief, sneaking from wall to wall while trying to escape their haunted house. They are described as being "kinda mean" and "jerks", but they "aren't evil, exactly". According to the Rhythm Items, the arrow used to shoot them is magical, as it has the ability to pierce a ghost. The archer, however, has to keep retrieving it, seeing as they only have one. The bow itself has been in the archer's family for generations. It's made out of wood from a sacred tree and a left-handed dragon's whisker. The tree was also shaped like a two-headed horse. 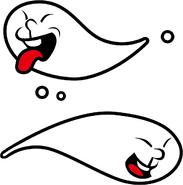 Retrieved from "https://rhythmheaven.fandom.com/wiki/Sneaky_Spirits_(Character)?oldid=47142"
Community content is available under CC-BY-SA unless otherwise noted.