See and Saw (Mr. See and Mr. Saw in the European version) are characters in See-Saw.

See and Saw are rather plain in appearance. They look exactly the same with black bodies, white heads, long legs and arms, and big eyes. Their mouths vary depending on what action they're doing, but they're usually seen smiling with their small mouths.

See and Saw are See-Saw inspectors. Together, they jump on the ends of see-saws to make sure they're safe for children, according to Partners, the perfect reward for See-Saw. Also in this, See and Saw talk about their past and their current status. Saw is revealed to be married, and it turns out they've been working together for ten years. See says he's been falling on his head more often and Saw says he's been falling on his bum even more. The two discuss who's been getting hurt more, before deciding to test another see-saw at the end. The letter shows the two have a very close bond and they truly care for each other.

See and Saw test the players ability to react to quick timing and tempo changes. By jumping from the outside to the inside of the see-saw, the player must react quickly and adjust their timing accordingly. 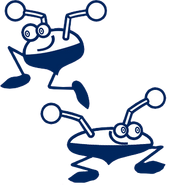 Add a photo to this gallery

Retrieved from "https://rhythmheaven.fandom.com/wiki/See_and_Saw?oldid=47431"
Community content is available under CC-BY-SA unless otherwise noted.