Rhythm Tengoku (Japanese: リズム天国) is the first game in the Rhythm Heaven franchise released for the Game Boy Advance on August 3, 2006. The player uses the A, B and sometimes the arrow buttons to control various characters, from a clapping trio to a space batter. An unofficial fan translation patch known as Rhythm Heaven Silver can be downloaded here. 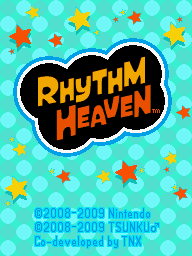 Rhythm Heaven also known as Rhythm Tengoku Gold (Japanese: リズム天国ゴールド) in Japan, Rhythm Paradise in Europe and Rhythm World in South Korea is the second Rhythm Heaven game in the series (first internationally) that was released for the Nintendo DS. It was released on July 31, 2008 in Japan, May 1, 2009 for North America, April 5, 2009 for Europe and September 2009 for South Korea.

This game is entirely controlled to the side of the Nintendo DS using the Touch Screen where the player can simply tap, flick or stroke to the beat with various Rhythm Games.

This is currently the only entry in the series to have songs and rhythm cues dubbed into six different languages which include English, French, German, Italian, Spanish and Korean.

Rhythm Heaven Fever also known as Minna no Rhythm Tengoku (Japanese: みんあのリズム天国) or in Europe as Beat the Beat: Rhythm Paradise and South Korea as Rhythm World Wii, (is the third (second internationally) game in the series released for the Nintendo Wii. It was released on July 21, 2011 in Japan, February 13, 2012 for North America, July 6, 2012 for Europe, September 13, 2012 for Australia and September 12, 2013 for South Korea.

This game goes back to the traditional button controls as it is controlled with the Wii Remote using the A and B buttons.

*The American version was digital only, thus it only has a logo.

Retrieved from "https://rhythmheaven.fandom.com/wiki/Rhythm_Heaven_(series)?oldid=46467"
Community content is available under CC-BY-SA unless otherwise noted.