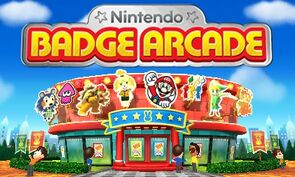 Nintendo Badge Arcade (バッジとれ〜るセンター Badge Torēru Center) is a free-to-start application for the Nintendo 3DS, allowing players to customize their 3DS Home Menu with badges. The game launched in Japan on December 17, 2014, November 10, 2015 in North America and in Europe on November 13, 2015.

Nintendo Badge Arcade takes place in an arcade filled with machines known as Badge Catchers, each containing badges based on various Nintendo franchises such as Super Mario, Animal Crossing, Pokémon, Splatoon and Rhythm Heaven; which are reorganized each day. Similar to real-life UFO catchers, players must use the catcher's claw to try and drop badges off the bottom of the screen. They can accomplish this by simply picking them up, or use other techniques such as pushing them or causing land-slides. Any badges that the player obtains can be added to the Nintendo 3DS' HOME Menu, with certain badges able to launch some of the 3DS' built-in applications. Special themes for the HOME Menu can also be unlocked.

There are a total of 14 Rhythm Heaven-themed catchers, & 11 Megamix-themed ones. All of them feature characters from the franchise.

The Chorus Kids & The Conductor

A Chorus Kid, a Flipper, Martian, & a Screwbot

The School Library Pep Squad in various outfits, including one dressed up as the Reporter from Ringside.

All the Rhythm girls from earlier, plus Pop Singer

Fruit Basket
Add a photo to this gallery

Retrieved from "https://rhythmheaven.fandom.com/wiki/Nintendo_Badge_Arcade?oldid=44580"
Community content is available under CC-BY-SA unless otherwise noted.