Mona (モナ?) is a high school student with a different part-time job in the WarioWare series game. Mona is quite adventurous and culturally savvy. She appears in a challenge set of Wario...Where? 2: The Sequel in Megamix. She is seen with the crowd of multiple Space Dancers, monkeys, the Clappy Trio, & The Rap Men in Freeze Frame. Mona's scooter can be in the Train's version of Catchy Tune 2. She has also appeared in Ringside outside the Rhythm Arena at the end of the minigame only, where she is nowhere to be found inside the building. Instead of Mona, Reporter dressed like her is having an interview with Wario-Man (Wrestler in disguise). 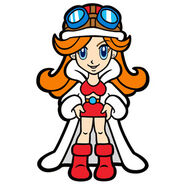 Mona as she appeared in her original design in WarioWare series.
Add a photo to this gallery
Retrieved from "https://rhythmheaven.fandom.com/wiki/Mona?oldid=44717"
Community content is available under CC-BY-SA unless otherwise noted.