Kat (カット Katto?) and Ana (アナ?) are kindergarten-aged ninja twins from the WarioWare series. Kat has pink hair with a single ponytail, while Ana has orange hair with two ponytails. Ana is timid and quietly, while Kat is more headstrong and overall the dominant sister, though she cares for Ana deeply. They appear in a challenge set called Wario...Where? 2: The Sequel in Megamix, which they've replaced Araline & Praline in the minigame Catchy Tune 2, where they are catching bouncing pineapples and oranges falling down from the stairs. 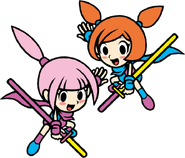 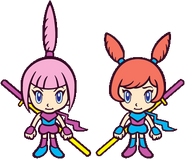 Kat & Ana as they appeared in their original designs in the WarioWare series. 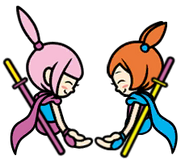 Add a photo to this gallery
Retrieved from "https://rhythmheaven.fandom.com/wiki/Kat_%26_Ana?oldid=44347"
Community content is available under CC-BY-SA unless otherwise noted.