Karate Joe (カラテ家?, Karateka) is the very first character to appear in the Rhythm Heaven Series in a Rhythm Game, appearing primarily in the Karate Man games, and one of the few characters to appear in every game since Rhythm Tengoku. He is succeeding his Father (父さん?, Tōsan) in karate.

Karate Joe is characterized by his pale white skin, big nose, and balding head. He wears a karate suit that matches the color of his skin. He is barefoot. He is often described as very expressive and fearless. His Father has a tall, black, curly beehive haircut. He wears a black karate outfit with a red belt. He has a moustache, sunglasses, and is barefoot just like his son. The two of them are also shown eating a lot of food between training sessions.

Karate Joe is a lonely martial artist who struggles with his training. He seems to be developing his own unique karate style which incorporates rhythm. He has a very emotional personality, which can be seen in his many facial expressions. At the martial arts competitions, the opponent reads all his tricks, and he can't get results. Sometimes he goes to his master for advice, whose usual response is "You needed to focus on the basics."[1]

Karate Joe has dreamed of being a soccer player even since he was a child, but his Father wanted him to master karate instead, and told him that he can't leave his house until he masters it. Even as an adult, Karate Joe still lives in the basement[2]. His Father also stole the ball that Joe had bought and used it as a punching bag[3].

Father is a master at karate, but not cooking. Occasionally he makes dinner anyway, such as one day when Karate Joe's mother was out of the house[4], and asks his son if he likes it. Joe has to lie and say that he likes it to make him feel good[5].

Father got his son bombs to make him face his fears. At first, Karate Joe thought they were fake, but then one exploded. He still vividly remembers his Father's face as he said "Are you surprised?"[6] Karate Joe has no idea where his father got them from[7].

Father keeps a bunch of barrels around, but Karate Joe has no idea why. He asked multiple times, but was told that he can only know when he is stronger than his father[8].

Karate Joe envies his Father's incredible vision that allows him to quickly tell the color of a light bulb and counter it[9]. He also sees this as an explanation for how his Father can easily counter his attacks[10].

In Rhythm Tengoku, Karate Joe appears in the first Rhythm Game, Karateka. It involves the Flow gauge, which determines if he can punch hard objects such as rocks and bombs, which depends on how well the player is doing in the game. In Karateka 2, he also has to contend with the ever changing tempo. In Remix 8, the Flow gauge disappears, and Karate Joe is enveloped in shadow. He can now punch rocks no matter what. At the end, he returns to normal, making a weird face. Karate Joe reappears in the arcade version of the game, with the same appearances, in addition to Karateka

, which is a sped up version of the original. Here, he is wearing boxing gloves and black boxing shorts, and is training for a boxing match.

Karate Joe reappears in Rhythm Heaven, in the last Rhythm Game before the Staff Credits, Karate Man. In Remix 6, he can be seen with hair and kicking soccer balls in place of bombs. He later makes a cameo in Blue Birds 2, where he is seen in one of the memories, training while the birds spy on him from a bush. In Karate Man 2, he takes on another day of hard training. This time he's very pleased with himself, though he tries to hide it. He makes the weird face again when kicking away bombs. In the epilogue, one of The Dazzles is shown to admire him, calling him "hot stuff" and offering him a towel. In Battle of the Bands, he can be seen in the audience, watching the Rockers perform on stage.

In Rhythm Heaven Fever, he is once again in the last Rhythm Game before the Credits, Karate Man. In Remix 7, he wears black shades while punching stuff in space. At one point he lies down and watches TV, which coincidentally shows Karateka from Rhythm Tengoku itself. In Remix 9 he is accompanied by a cat[11]. In Karate Man 2, he reaches "the height of mastery" in karate, after which he is seemingly able to control fire as seen in the Superb epilogue. In the Two Player version, he wears a headband, and is accompanied by another Karate Joe in purple clothes.

In Rhythm Heaven Megamix, he appears in Honeybee Remix, where he wears a bee hat and a stinger. In the middle of the remix, several bees fly past him. At the end, the hat and stinger fly away, and he starts thinking about pancakes. He also watches in awe at his Father's mastery in Karate Man Senior. He gives commentary on his Father's performance, the same way the Master does on Joe's training. Additionally, Karate Man Returns!, Karate Man Kicks! and Karate Man Combos! all reappear, along with a short version of Karate Man.

Cameo in Battle of the Bands from Rhythm Heaven

The cat eating a fish in Rhythm Heaven Fever 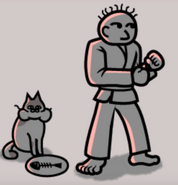 The cat sitting on Karate Joe in Rhythm Heaven Fever

His spirit battle takes place on the Suzaku Castle Ω stage playing the Rhythm Boxing track, where he is represented by Ryu. The battle has the "Item Tidal Wave" rule applied and the following conditions:

Community content is available under CC-BY-SA unless otherwise noted.
Advertisement