Start a Wiki
The Barista is a dog that works at the Café. The Barista will always be in the Café to talk with the player if they choose to do so. He offers advice, hint at upcoming Perfect challenges, and, perhaps most importantly, has the ability to skip stages which the player cannot clear.

In the first three games, it is unclear if the Barista is the same character that appears in the Café in every game.

In Rhythm Tengoku, a human woman is seen working behind the counter, but the actual barista refers to themself as a dog.

In Rhythm Heaven, when the Barista wants to talk, a dog that appears many times in the games will appear on the Cafe icon in the cup. However, in the cast list, this white dog is just referred to as "Dog". In addition, the Barista (identified specifically) is always offscreen: The speech bubble points to a location past the bottom screen. The Barista also mentions how they've had a dog for eleven years now, and that he's getting a bit "long in the tooth".

In the Rhythm Heaven Fever cast list, the white dog is identified as the Barista. His face appears in the game's "good luck" stamp (see above). However, like in Rhythm Heaven, he is never specifically seen at the Café.

In Rhythm Heaven Megamix, while in the cafe, the Barista is seen behind the counter and sometimes talking to customers, proving that they are the character you see in the cafe.

As mentioned above, the player can talk to the Barista at any time while in the Café. Talking to them will cause them to mention:

If the player recieves three "Try Again" ratings on one uncleared game, the Barista will offer to let them continue to the next game without needing to complete the current one.

The Barista looks like a white dog with a black tail and red and blue headphones, given to him by someone as shown in an official comic. 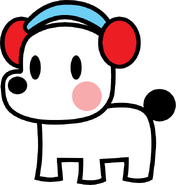 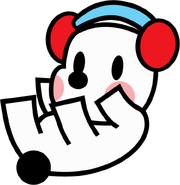 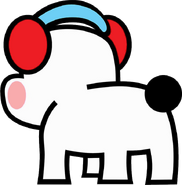 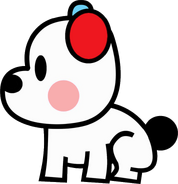 Add a photo to this gallery

Retrieved from "https://rhythmheaven.fandom.com/wiki/Barista?oldid=52044"
Community content is available under CC-BY-SA unless otherwise noted.