Ashley (アシュリー Ashurī?) is a witch in training, who lives in a mansion in Diamond City in the WarioWare series. She has long black hair and two long ponytails and she's very emotionless and rarely smiles. She is largely uninterested in activities unrelated to improving her witchcraft; such tasks are typically relegated to Red. Ashley made a cameo as a plush toy in the Cafe. The real Ashley appeared in a challenge set called Wario...Where? in Megamix. She is featured in Tap Trial set, replacing a Tap Trial girl, in which she must tap with two other monkeys. 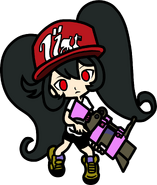 Ashley in her Splatoon outfit badge in Nintendo Badge Arcade 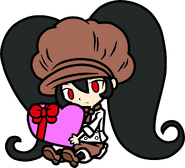 Ashley as one of Valetine's Day badges 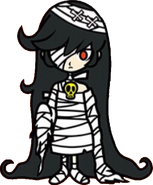 Ashley as one of her Halloween badges
Add a photo to this gallery
Retrieved from "https://rhythmheaven.fandom.com/wiki/Ashley?oldid=47135"
Community content is available under CC-BY-SA unless otherwise noted.